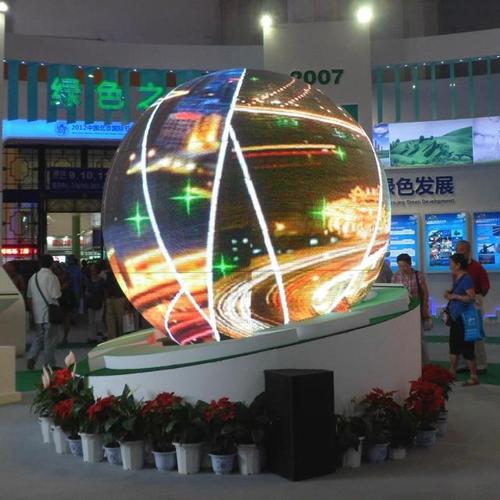 It consists of a core control module, a rotation display module, a wireless module, a font library module, a motor drive module, and a power supply. The fan blade is designed to be circular, and there is a circle of LED lamp beads on the fan blade. The color of the LED is single-color or multi-color. When the fan blade rotates around the central axis, a spherical surface is generated, and all the spheres are spherical. LED, with the font software, when the fan goes to the corresponding position, light up the corresponding point, so you can control the content of a spherical display.

The earliest ball screen in the market, commonly known as the watermelon skin ball screen, is composed of a watermelon skin-like PCB. Its advantage is that the structure is intuitive and the types of PCB are few. Its fatal shortcomings are the north and south poles (that is, 45 degrees north latitude. North and south of 45° South) Can't play back images properly, so the picture utilization rate is too low or the picture is distorted. The reason is that all current pixel positions of the image source are arranged in rows, and the pixel points of the south and north poles of the LED screen of the watermelon peel are not arranged in a row but arranged in a circle, so Difficult to display.

Triangle sphere led display Flat triangle PCB ball screen, commonly known as the football screen, it overcomes the shortcomings of the north and south poles of the watermelon skin ball screen can not play the image, so the screen utilization rate is greatly improved. The disadvantage is that there are many kinds of PCBs, and the spacing between pixels is limited by the honeycomb arrangement, and the spacing between dots cannot be too small, and software writing is also more troublesome.

LED spherical screen composed of quadrilateral PCB, is known as six-sided panoramic LED screen. Its production method is also very simple. Now the production of a 1.5-meter-diameter ball screen is taken as an example: the entire sphere is divided into six planes of exactly the same size, and each plane is divided into four unit boxes of the same shape and size. There are 24 faces in 6 faces. Each unit box consists of 16 PCBs with surface-mounted LED lamps, which are finally mounted as a six-sided panoramic sphere led display.

In terms of design concept, it means environmental protection, energy saving and low-carbon earth. sphere led display has become the best choice for museums, science and technology museums and entertainment venues. From indoor to outdoor, etc., the diameter can also be customized according to customer requirements.